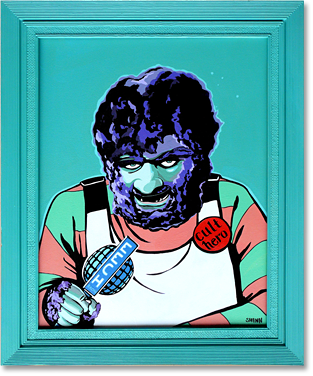 The Hilarious House of Frightenstein was created in 1971 at the studios of CHCH Channel 11 in Hamilton, Ontario, Canada. For the next 25 years it aired across Canada and in parts of the United States. During its run, the show touched and influenced many people. It might have been the strange characters and writing, or maybe it was the early morning hour in which the show often ran. Whatever the reason, Frightenstein got into people’s minds and it stuck there.

Where and When it Aired

In 1971, on its original station CHCH 11, The Hilarious House of Frightenstein aired at 10:00am on Saturdays — right after Spiderman at 9:30am and right before Camera on Camera at 11:00. Throughout the next 25 years it aired all over Canada and in some parts of the U.S.. Here are a few memories of the show in various markets around the continent:

“Wonderful flashbacks of Saturday mornings (7am in Edmonton on ITV after Max Mouse & Prof. Kitzel... if I remember correctly), laying on the couch, eating cereal, etc. right until Spiderman ended at noon.”
— Gordie Roline, 1998

“I grew up in Detroit where I could get in the CBC on channel 9. After school everyday I would tune in to the great cast of Frightenstein.”
— Jay Bliznick 1998

“The U.S. market (at least in the NYC area) cut the show in half, airing it in half-hour blocks weekdays at 4pm, preceding a syndicated reissue of the original Mickey Mouse Club.”
— Vincent Basilicato 1999

“I was a very young boy living in rural Ohio back in the early 70's and HHoF was being syndicated on a great station out of Cleveland (WUAB, Channel 43.)”
— Chris Carlisle 1999

“I watched this show as a child growing up in New Orleans on then independent UHF TV station WGNO channel 26. This was before cable TV, and WGNO had a slightly fuzzy picture out in the suburbs where we lived.”
— Jonathan Helis 1999

“Waking up at 6 on Saturday Mornings, (circa 1980), turning on CKCK-TV in Regina, Saskatchewan, (very early, before all the up-to-date cartoons came on)”
— Geoff Smith 1999

“1974 (which is when it started airing in the U.S.) … In Los Angeles, it was on KTLA Channel 5 every day at 3:00pm, so I would rush home from school to see it. The American distributor recut it, so that the episodes I saw were only thirty minutes each. The American version also had an obnoxious laugh track added in, and the sketches were cut.”
— Charles Zigman 1999

The letter that the show sent out, if you wrote them in the 70’s: 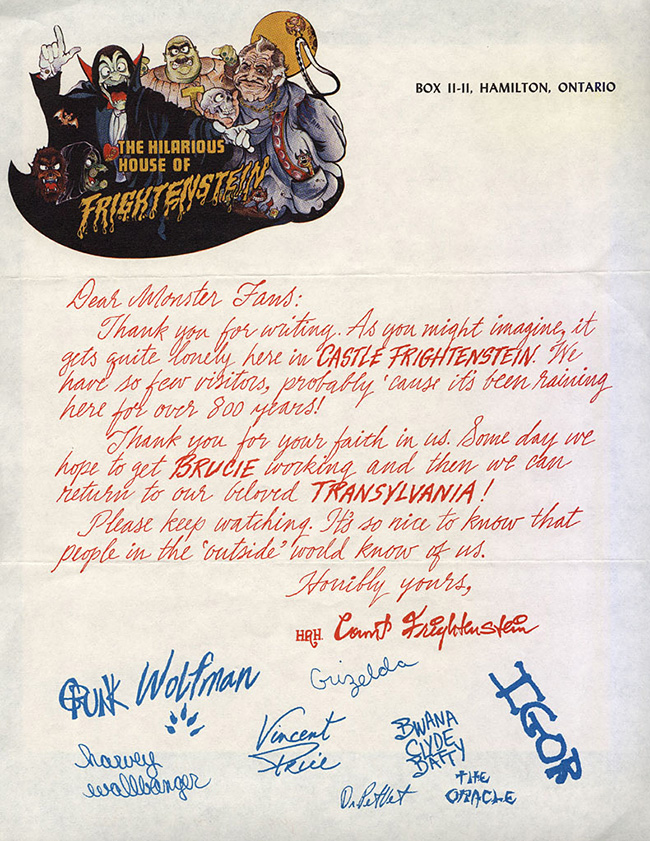 Here is a postcard that they would also occasionally send out. 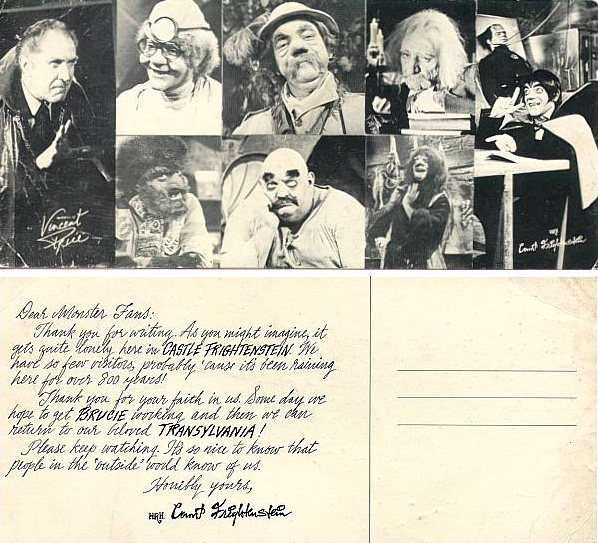 How it was Made

Production of the show lasted approximately 9 to 12 months, depending on who you ask. It was shot completely out of sequence, and all segments were shot together. So, Billy spent a few weeks as Grizelda, a few weeks as the Librarian, even a few days as the ape getting hit in the head with baseballs. This explains why there are no running themes throughout any of the episodes. The shows were then assembled from the bits and pieces and all follow the same basic pattern of sketches. Vincent Price’s involvement was the same as everybody else — a few intense days recording mountains of material. John Bradford remembers working with Vincent:

“Of the hundreds of celebrities I’ve met in the biz, Vincent Price will always be my favourite, as a result of this show. We shot about four hundred bits with him over a four day session. He accepted the gig because he loved kids and saw the innovation in this vehicle. He allegedly worked for around $13,000 in total when that was commonly his daily appearance rate. He would read the script to himself, put his head down for a few seconds and do a single take read on-camera. Next! At one point the crew was exausted by his pace and he suddenly disappeared. Everyone thought he MUST have gone to collapse somewhere. He had hailed a cab, gone to the local beer store and brought a couple of two-fours into the station. We all sat cross-legged in the studio and listened to his stories of Hollywood and Cecil B. DeMille. The next break we took, he had his picture taken with each crew member in the make-up room. One of the guys blew them up to 8x10’s that night and he wrote a personal note to each of us on it. Mine still hangs proudly in my office.”
— John Bradford, 1998

John also remembers others aspects of the production:

“I was on the crew for the entire series at CHCH-TV. My credit on the show is under ‘videotape’ although I also did some of the editing, including the original opening which aired exactly once and was yanked because it scared the begeezus out of the kiddlies! That was back before time code and non-linear systems, and just a few years after actual physical splicing processes. Rif, the producer, and I spent 36 hours straight, cannabalizing the system to create editing effects that nowadays are programmed in a matter of minutes. Another memory is the creation of the psychedelic background keyed behing Fishka and Billy. Two of us in the videotape department confused the hell out of the gear and created a synchronous feedback to go with the music. The other operator, Doug Bonar, is now Vice President of Global Television. I am a Professor of Television Broadcasting at Mohawk College in Hamilton … Rif gave each of us the princely sum of five dollars for creating the effect. In hindsight, I should never have cashed the cheque… Rif is famous now! That was his motivation for crew ingenuity. We had a ball with the show and felt a sense of ownership in making it great. You may not be aware that when it was syndicated in the states in the early 70’s it aired around 4:30 in half hour format. The story we heard was that it practically cleared the streets of New York of soft drug users so that they could freak out on the Wolfman segments!”
— John Bradford, 1998

The Hilarious House of Frightenstein last aired on a Canadian cable station called “Showcase” in 1997. When its run was over, the broadcast masters used by Showcase were allegedly destroyed at the request of the producer.

Frightenstein suffered its biggest blow in 2003 with the death of Billy Van. In the words of cameraman Dave Cremasco: “Billy was the show”.

In 2005, Stacey Case organized a Frightenstein Fest which offered a reunion of cast and crew, merchandise, episode screenings, and the premiere of the documentary “Return to Transylvania”.