THE COUNT AND IGOR

The two stars of the Hilarious House of Frightenstein are undoubtedly Count Frightenstein and Igor. The Count (played by Billy Van) is a vampire, but not the bloodsucking kind - he prefers pizza and toast. Perhaps he should suck a little

blood; it might put some flush back into his green face. He always appears in formal dress - black tuxedo and white gloves, with a full black cape (with red lining), and naturally white tennis shoes. Being of aristocratic blood, the Count assumes he should be in charge of every situation, and that he can do no wrong. Unfortunately for him most of the time it seems he can do no right. The Count fancies himself both an inventor and entrepreneur, and proves himself repeatedly to be similarly incompetent at both. His most significant creation is Dracola, a red soft drink bubbling with dry ice that he tries to pass off on the local villagers, with little success. Perhaps the problem is the secret ingredient - 2 tablespoons of gasoline per bottle! The Count's manservant and companion is Igor (played by Fishka Rais), a green-skinned Michelin man lookalike. Igor's attire is what looks like white pajamas, with a wide studded metal belt around the middle from which hangs a ring of keys. Igor is a good-natured fellow, and puts up with the Count's bossiness and continual stealing of his ideas with an admirable stoicism. From what they tell us, the Count and Igor are ancient creatures (around 800 years old each), exiled from their beloved homeland of Transylvania for some unknown reason, and only able to return once their monster Brucie has been restored to life. Fat chance of that though, with the Count's engineering talents.

Individually both the Count and Igor interact with the other castle inhabitants in a number of different sketches; they appear together in every show in three or more full-length sketches, all set in the front foyer of the castle. The opening sketch is a staple and is as structured as any of the main sketches (i.e. Zany Zoo, Grizelda, etc.). The rest though are all unique; there are four themes which do predominate, and at least one of the other sketches in each episode follows ones of these themes. These are: going through the day's mail, testing a new idea to get Brucie to work, answering phonecalls coming in to a pile of telephones on a table, and the unveiling of a new invention by the Count. Each of these is discussed below. 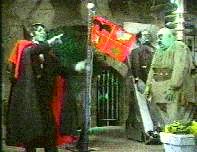 At the beginning of every episode of the show, the first character we see is the Count. He is standing in front of a planter box of sagging tulips, preparing his latest scheme to kiss up to the flowers to get them to sprout. His charms fall short though, and the tulips go horizontal. As the flowers droop Igor is heard slamming the castle door; he stumbles down the steps with his raincoat draped over his shoulders (it's been raining at the castle nonstop for 13 years) and tries to slip past the Count unnoticed. The Count has never missed him yet though, and chastises him for his lateness, demanding an explanation. Igor provides something half-baked, but the Count announces he has no time for such foolishness, as it is time to raise the flag (of Transylvania), and sing...

THE ANTHEM AND PLEDGE

[Igor, singing to the tune of the Battle Hymn of the Republic]
Gory, gory Transylvania
Where werewolves and bats will always maim ya
The murky moor will likely claim ya
As we go stumbling through-oooo-oooo-ooooo...

[Count, spoken]
I pledge by the sign of the three toed sloth
To do my best to do my duty
To always obey the laws of the werewolf pack
And to never rest, until Brucie lives once more
And takes his rightful place in the annals of distinguished monsters
And I can once again return to that most goriest of homelands...


Once the singing is finished, the Count returns to his interrogation of Igor as to his lateness. Using the prop he dragged in with him, Igor then delivers the first bad joke of the show. Here's an example:

In this bit, the Count and Igor are chatting at the table in the castle foyer, when the castle doorbell goes "Cock-a-doodle-doo!". Igor goes to answer it, and sets the Mailman to screeching and hightailing it out of there (he doesn't seem to like Igor's looks). Igor takes this treatment kind of hard, and sulks as he brings the mail back to the table. The Count bids him nevermind though, just hurry up and start opening the mail. The letters generally consist of bills and threats from the villagers (the Count doesn't seem to get along too well with the villagers of Frankenstone; this isn't surprising considering how many he owes money to). The Count treats these with great respect, chucking them onto the floor with a flick of his wrist. Much more eager is he though for the magazines and packages. The packages he sets upon like a jackal, tearing them to shreds to get at their contents. With the magazines the Count lets Igor take the lead; their subscriptions include such titles as Playmonster, Better Castles and Dungeons, and Reader's Disgust, and from that day's issue Igor picks an article and reads it to the Count, usually culminating in the display of a hand-drawn centrefold from the magazine which looks like it was done by a 10 year old. 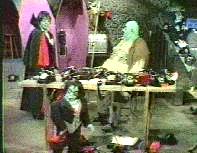 This sketch opens with the Count and Igor beside the big table in the castle foyer, upon which has sprouted a forest of old rotary telephones. The phones differ between sketches in number and appearance; in some sketches there might be 50 phones piled one on top of another, in other sketches only about 10; in some sketches the phones are all black, and in others some of the phones are painted various bright colours. The phones start ringing and the Count and Igor take turns answering; the fun begins as they struggle to synchronize themselves with the sound effect of the phone ringing - if they pick up a receiver and the ring continues, they just shrug it off and grab another phone. A wacky conversation then ensues with whoever is on the other end, ranging from the Count's mother to Ooglick (a Martian who makes gulping sounds as he speaks) to the Wolfman to villagers complaining about Dracola, and on and on... Before they answer certain lines the Count and Igor will put on appropriate hats for the calls expected on those lines, including a square bell boy's cap, a newspaper editor's visor, a fireman's helmet, and a policeman's hat. The fireman's helmet is particularly humorous as it always slides backwards off the Count's greasy head. The last call frequently comes in on a payphone in the coffin propped up on one of the walls of the foyer, and when the Count goes to answer it out pops Count Munchkenstein (Guy Big) who trots off stage, leaving the Count scratching his head and wondering out loud who that guy is. 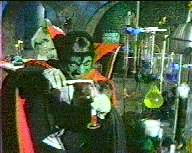 The Count's creative brain is always going, and almost every episode he comes up with a new contraption to revolutionize life as we know it, and earn himself a million gulars with which he can fix Brucie and thereby get back to Transylvania. While chatting with Igor the Count suddenly has an crazy inspiration, and five seconds later, after he has stepped offstage and the racket of multiple hammers and saws is heard, he steps back out to present his new invention, to the sound of an orchestral fanfare. The Count's inventions can be broken down into two categories - the dangerous ones, and the useless ones.

For the dangerous ones Igor is always made the reluctant test subject, in spite of his protests that he doesn't want to get involved. These never work, and Igor is always lucky to escape with his skin. The useless ones do periodically work though, and the Count takes full advantage to boost his ego.

Examples of the Count's inventions:

In these sketches the Count's neverending struggle to get his monster to work is featured, with the Count either marching into the castle foyer and announcing that he knows why Brucie doesn't work, or else sitting at the table saying he has tried everything to get Brucie to work, and then assenting to some unlikely suggestion of Igor's, saying "Why not?". The two then turn to Brucie and start to work, the Count usually playing around with Brucie's innards through a door in his chest, or hooking various wires up to Brucie's neck bolts, followed by Igor throwing a switch on the giant computer to the side of the monster to deliver an electric charge. The best tricks they try on Brucie are psychological - on the belief that Brucie doesn't work because he isn't motivated to work. Brucie is stubborn though, and the Count and Igor are always disappointed.

Examples of things the Count and Igor have tried on Brucie: 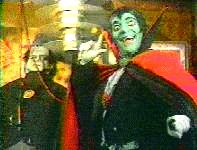 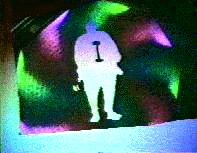 Count — Joke 1 - Pennies and a Hammer

Count — Joke 2 - Not a Rocket Scientist

Igor — Everybody Gets Letters

Igor — Came to get a Pickle