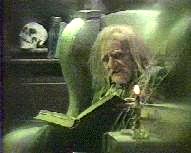 Are you ready for fear? Then enter the library. Within the Librarian sketch (which is a show staple, appearing in every episode), the mock horror element of the Hilarious House of Frightenstein reaches its pinnacle. The man (played by Billy Van) is an old curmudgeon who haunts the castle library — a dark place full of antiquated volumes and dust and cobwebs by the kilo. His defining characteristic is his unique sense of the macabre, which is reflected in the choice of tales that he tells. The appearance of the Librarian is just like that of his books — ancient, wrinkled, and dusty. His costume is an old dress suit (missing only the top hat) reminiscent of a mortician’s outfit from the last century. His long unkempt grey hair spills over the deeply grooved face with the fat nose and long moustache, onto his shoulders white with dust. The Librarian walks stooped over, leaning on a cane, and speaks in a deep, gravelly voice.

The Librarian sketch opens with a shot across the library, through a half empty bookshelf with a couple of stacks of books on it. The Librarian appears and knocks over one of the stacks, and the books land with a resounding whomp! He just smiles at this, and motions us to follow him. He picks up a large old volume, shuffles across the room to his high-backed chair and drops himself into it. On the way, he introduces us to Polly the stuffed bird (perched on the top of the chair), giving it a good whack with his cane; and also to his cat Horrendous, if it is prowling in the area. The Librarian cracks open the big volume, blows a cloud of dust from it, and now the fun begins. The Librarian has two loves: fables and nursery rhymes. He is quite convinced they are the most horrifying tales ever told. 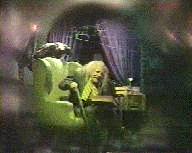 And evil-hearted one that he is, he wants to use them against us. He is ultimately impotent though, as the likes of “Twinkle Twinkle Little Star” and “The Tortoise and the Hare” won’t scare anyone. After finishing his reading, the Librarian eagerly turns to the camera in hopes of seeing through it the horror on the faces of his viewers. He sees only smiles and laughter though (as he tells us), and this makes him crestfallen. But hope springs eternal within the heart of the Librarian, and he swears to us that he will get us next time. But for now, the Librarian grows weary…

Librarian — “Days of the Month”

Librarian — “I become lonely at times”