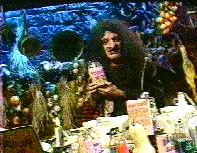 Grizelda is the castle witch, and a homelier one you are not likely to see. Played by Billy Van, Grizelda is the only female character in the show, and her lair is the kitchen (those were not politically correct times). Her character was probably influenced by both Julia Child and Graham Kerr’s “The Galloping Gourmet”. Sporting long dirty black hair, a nose and chin so protruding they nearly touch, and filthy forearms and hands, Grizelda naturally assumes she is a stunning beauty and never passes up the chance to compliment herself. The cooking sketch featuring Grizelda is a staple of the show, and appears in every episode. In each sketch Grizelda prepares a tasty treat from her recipe book, something with a fancy alliterative title which invariably involves flour (which she sprays about, leaving a cloud in the air), and an egg (which she spikes into the mixing bowl with great flourish). The last ingredient is given special consideration, and Grizelda has to cross the kitchen each time to fetch it from a shelf in her “pantry”. On the way she pays a visit to her friend Polly the stuffed bird, reading the message on a rolled up note in its beak, making some crack, and then topping it off with a parting smack on the head. The last ingredient goes straight into the cauldron with a big splash, then Grizelda grabs the mixing bowl and...

She almost never fails to crank face-first into the big brass pot hanging from the ceiling beam (why doesn’t she move that thing?). After recovering, it’s into the cauldron you go! with the rest of the ingredients. “Cauldron cauldron, toil and trouble, cauldron boil, and cauldron bubble!” seem to be the magic words, and with a little stirring the concoction is ready for tasters... One big slurp later the effect of her hazardous cooking shows, as she staggers around like she’s been poisoned, or else sucks in her cheeks to make a fish face. Finally she ends the sketch by declaring the day’s effort another bomb. 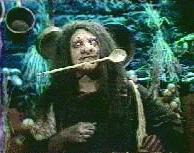 Some of Grizelda's favourite ingredients:

People Grizelda has said “Eat your heart out!” to:


Grizelda also appears regularly in a sketch with Harvey Wallbanger, where she answers questions on manners and etiquette supposedly sent in by the younger viewers (see the Harvey Wallbanger section of the Other Characters page). Her expertise is highly dubious, but frequently good for a laugh. 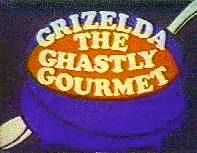 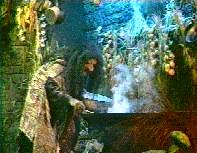 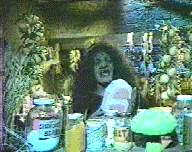